More than 36 million Americans experience some form of hearing loss, according to the National Institute of Deafness and Other Communication Disorders. But only 1 in 5 people that could benefit from a hearing aid actually wear one. Despite the days of big clunky hearing aids being long gone, the stigma associated with wearing a hearing aid still remains.

A recent article by CNN asks, “Can Apple make hearing aids cool?”  And that is the million dollar question.  On the cutting edge of technology, new Apple devices fly off the shelves like there is no tomorrow.  When it comes to buying a hearing aid, however, people with hearing loss may wait up to 8 years before investing in technology that will improve their lives. 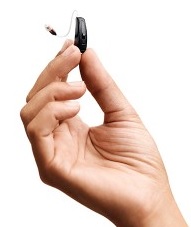 65 year-old Dick Loizeaux, a consultant in Chicago, has been wearing hearing aids for about 10 years.  When interviewed by the Star Tribune, he said: “I probably should have gotten them earlier, but I didn’t want a big hunk of plastic in my ears that just screamed ‘You’re an old person.’”  He said that ReSound LiNX has made a real difference in his life. “If they had had this technology before, I would have gotten hearing aids when I was 40.”

We are living in a technological age where new gadgets are continuously being released.  Hearing technology has evolved to a point where individuals can hear better and connect wirelessly to their personal electronics via a small and extremely discreet hearing aid.  Unlike previous iterations of wireless hearing technology, this new generation allows patients to retain their personal dignity while staying better connected to the people and technology around them.

As we move into an age of human-technology integration, we are hopeful that wireless hearing devices will make it easier for the hearing impaired to seek treatment without feeling a sense of their own mortality.