ReSound proudly sponsored Team Kyte for the hockey competition at the Canadian Deaf Games, held the last week in February in Winnipeg. The team went undefeated, bringing home the Gold Medal! Below is a first-hand account of the family’s experience.

The Canadian Deaf Games: A Synopsis by Rob Kyte

While Canadian Deaf Sports Association (CDSA) was organizing this event, it was suggested that to round out the number of teams for Hockey, that a Team Kyte be formed.

The organizers were hoping that at least 5-6 Kytes would respond to their request. To their surprise and in typical Team Kyte spirit, we showed up with a total of 9 members out of a total 11 hearing impaired members of the family, coming from as far as Hong Kong.

My brother Jim served as coach. When he made it to the NHL, with the Winnipeg Jets being his first team, he spent his formative years in Winnipeg developing a reputation as an enforcer and working his way into the hearts of the Winnipeggers. Editor’s Note: Kyte made history by being the first (and to date, only) legally deaf National Hockey League (NHL) player, playing 598 games in the NHL.

The Canadian Deaf Games commenced with the opening ceremonies where each athlete walked across the stage under the banner of their province they were representing. Since the Kyte family originated from Ottawa, we chose to go in as Ontario. The team proudly wore their Red Jerseys, sponsored by Resound, the hearing aids that four family members now wear.

The first match we played was against Team Quebec. The format of the game was 3 on 3 on the full ice. If there was a penalty, then the non-penalized team would add a player to become 4-3 for the duration of the penalty.

Although Team Kyte never practiced together, we quickly jelled with Coach Jim ensuring that the lines were well balanced with speed and skill. The “young guns” (nephews and nieces) really stood out with their speed, stick handling skills, shooting, and hockey sense (Out of 14 nieces (3) and nephews (11), 6 are hearing impaired). We played well, and comfortably won the game.

The team had a bye in the afternoon, so they went off to support the other sports close by which happened to be curling. The team wore their ReSound hats to most of the events: games, meals, and just hanging out.

The next day, Team Kyte had two matches. One against Team Western and Team Rockies #2.  Both matches were tougher than Team Quebec, but again Team Kyte’s depth overcame the other teams with wins. It should be noted that the Team Kyte was down to 7 skaters as one of the original brothers only lasted 3 shifts in the first game against Team Quebec due to a back injury.

On day three, Team Kyte has one match left in the round robin and then the Gold Medal game as the team already qualified due to its record. The first match was against the 2nd team from the Rockies – Team Rockies #1. Again, Team Kyte’s depth and excellent goaltending secured the win. However, another member of the original brothers had to leave the game due to an ankle injury. In keeping with the family philosophy, the brother with the back injury suited up for the 3rd period to alleviate the stress of having only 6 skaters.

The Gold Medal game was against Team Rockies #2 team. It was a tense match as neither side wanted to make a mistake. We felt the pressure as were the only undefeated team. And we played with no coach as Jim Kyte decided to play despite of his knee issues. The other injured brothers also dressed for the game.

The efforts paid off as Team Kyte was victorious in securing the Gold medal!

After the game, Jim Kyte and the twin girls were interviewed after the game by CTV news, which was aired here: https://winnipeg.ctvnews.ca/video?clipId=1335265

It was a memorable experience to have the family together to play as a hockey team, as it has never been done before in an official capacity. The synergy amongst the family members was evident throughout the whole event. Each uncle was assigned a nephew as a roommate that added to the interaction, bonding and collaboration. This will go down in the Kyte Family history books.

It’s also a testament to the strides we’ve made in addressing hearing loss.

In the 1970s, long before inclusion in the mainstream classroom existed for hearing impaired children, our parents advocated to keep us, in the regular classroom environment, where they were able to excel academically with the use of hearing aids (which have come along way since then). Back then, our hearing aids consisted of a box strapped to our chests with wires going to our ears. Later on, we wore the behind the ear types that worked well, until you were hit in the ear, but it was an improvement over the chest straps.

Fast forward to today. With the smart technology that ReSound offers, we are now able to listen to our TVs, use our cell phones and follow s conversations in restaurants/meetings, and in cars. This has certainly improved our quality of living.

All in all, coming together to play as a team against the other teams was an amazing experience, with the nieces and nephews passing, shooting, and involving their uncles in the play. The generosity, friendliness, kindness, and patience of the other non-hearing and non-verbal participants at the games was truly inspiring. 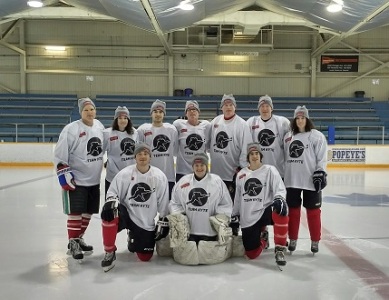 This entry was posted in Noise & Feedback. Bookmark the permalink.