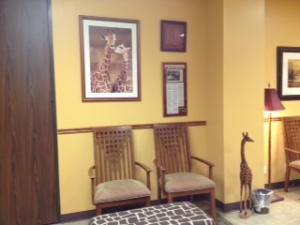 For those of you that know Jane Watson of San Antonio-based Audicles, you may wonder why she has giraffes all over her office?  Several years ago, Audicles did a health fair at the zoo and handed out coupons for hearing screenings. They put two giraffes on the envelope and people made a lot of positive comments about them. Two days later, Audicles employee, Sandy, saw a shirt with a giraffe and the saying, “Head and shoulders above the rest” on it. The rest is history. People can remember the giraffe mascot better than the name “Audicles”. 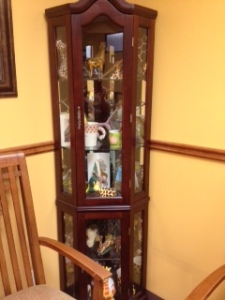 In her spare time, Jane loves keeping fit. She has run a few 5K races, but admits that it’s only to satisfy her trainer. Instead, she has another passion – playing golf. “I’m officially addicted!” she says. Jane plays regularly with ReSound’s Josh Wintersteen in San Antonio.

“It has been fun to learn something new and actually see improvement!” she says. “In fact, Josh, Chuck Dueber (ReSound Inside Sales) and Sherri Stoneback (Customer Care) gave me a very special golf bag last year for Christmas with my name on it!”

Jane’s extra-curricular activities are not limited to the golf course though.  For the last 15 years, Jane has conducted a hearing wellness clinic at Air Force Village and served as a contractor for the VA in San Antonio for several years. The combination of clinical and hearing aid skills has made Jane a valuable consultant to various school districts and several ENT physicians.

This entry was posted in Practice Management and tagged Audicles, Jane Watson. Bookmark the permalink.